Scroll down the page to see the gallery of Texas sculptures.

Immigration to the United States

After fleeing Europe in late 1870, Elisabet Ney and Edmund Montgomery, along with their devoted Austrian housekeeper Crescentia "Cencie" Simath, settled in Thomasville, Georgia. It was here that the couple's first son, Arthur, was born; Elisabet was thirty-eight years old.

After their closest friends in Thomasville - the Stralendorffs - moved back to Germany in 1872, Elisabet and Edmund began their search for a new home. During their travels, their second son, Lorne, was born, no doubt solidfying their decision to settle somewhere more permanent and idyllic.

Though they searched throughout the North and Midwest United States for a suitable home, they eventually decided to join the wave of settlers headed to a land described as "the best country in the world" by W. J. Blewett.

Photograph of the facade of Liendo Plantation in Hempstead, Texas

Upon arriving in Texas inn 1873, Elisabet purchased Liendo Plantation in Hempstead for her family. The grand home needed repairs, but the land surrounding it was beautiful and fertile. Elisabet fell in love with Liendo immediately, declaring, "Here I shall live, and here I shall die!"

The couple would live at Liendo for twenty years. During this time, Elisabet prioritized farm work over sculpting, and Edmund primarily focused on his scientific and philisophical work.

The years the couple spent at Liendo were challenging, filled with good times but also severe burdens. Early on, their oldest son, Arthur, then three years old, died of diphtheria. Elisabet's relationship with her younger son, Lorne, deteriorated over these twenty years as he rebelled against his mothers over-protective tendencies. Ney and Lorne never completely reconciled.

By 1891, Liendo had become for Elisabet, completely isolated from the world of the arts, intellectual stimulation or creative expression, a "lovely cursed retreat." For Edmund, on the other hand, immersed in his writings which were bringing him increasing professional attention and honor, Liendo was the answer to his expressed desire "to live in the open, quietly, peacefully, with a few congenial and loving companions." It seemed inevitable that their lives would diverge again as it had in their early life: Elisabet to Austin to pursue her idealistic dreams in the world of "great persons;” Edmund continuing his research and writing on the secluded plantation under the care of the devoted Cenci. 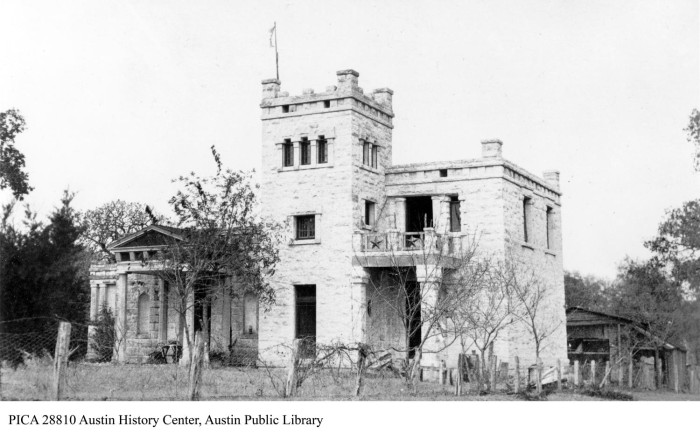 [Exterior of Elisabet Ney Museum] hosted by The Portal to Texas History.

As with many things in Elisabet Ney's life, forging a rich, creative and humanitarian life for the remaining fifteen years of her life in Austin, was not accomplished without a struggle. There was, first, a financial struggle. At one point, Ney entered a notice in the paper:

To my creditors: - Please don't bother to send me any bills. I have no money. – Elisabet Ney, Sculptor.

It was not until the Texas Legislature appropriated $32,000 for Ney to execute her portraits of Stephen F. Austin, Sam Houston and Albert Sidney Johnston memorials in marble that her financial situation stabilized.

Ney’s first task on arriving in Austin in 1892 was to purchase four and a half acres of rolling prairie, wildflowers and post oaks along Waller Creek on the northeast edge of the developing suburb of Hyde Park just north of Austin. On this land, the Ney left in its natural state, she built a small classically-styled studio reminiscent of a Greek temple embodying her romantic ideals and her neo-classical training. She named her studio Formosa (Portuguese for “beautiful”) after the studio her husband had created for her on the occasion of their marriage on the tropical island of Madeira in 1863. Built of native limestone, the studio gave the appearance of a small castle surrounded by native prairie, wildflowers and post oaks with a running creek and nearby lake. The creation of Formosa bears the imprint of Ney’s conscious effort to create personal surroundings that combined a deep personal love of nature and a long held conviction of the power of art to enrich life and uplift the soul.

Although Elisabet Ney personally had the reserve and formality of a European lady, according to Bride Neill Taylor, her most intimate friends found her “totally human, impulsive, recklessly frank and independent . . . full of open delight.” Many friends were drawn to the delightful and interesting “Miss Ney” and Ney’s Formosa soon became the site of creative impulses of a different, but no less important nature: those that arise out of the meetings of minds and shared aspirations.

It is not surprising, and quite interesting, to find Elisabet Ney’s Formosa described as a “salon” in 1892 Austin where “saloon” was one of Austin’s most widely known attributes. And yet, Taylor’s account of the meetings at Formosa very aptly describes the salons of Elisabet Ney’s earlier life in Berlin and Munich. On might say, Elisabet Ney, among her many contributions, introduced the first European “salon” to Austin in 1892!

According to Taylor, as the years passed, the studio became noted as "the chief social center of culture in the city" and a welcome there an honor eagerly coveted. Most were friends who had shared in the struggle "to bring a sense of beauty into the crude bareness of Texas life."

Here, at Formosa, from 1892 until her death in 1907, Ney’s life seemed to come full circle. Ney was finally able to practice her art and live according to her deeply held ideals which had been honed and tested in a remarkably rich, varied and, at times, intense life.

Formosa remains today a tribute, both to Elisabet Ney's art, and to her art of living. At her death, the Austin Daily Statesman wrote, after summarizing her many accomplishments:

“She had so many friends. It was the woman, quite as much as the artist, that enamored herself to

hundreds of warm friends and admirers.”

Surely, a eulogy Elisabet Ney would have welcomed.

Scroll through the gallery of Texas sculptures below, and click on the image if you want to learn more information about the object or want to see more photographs.

Bust of Christ, marble, modeled 1896; cut 1904. Ney completed this bust of Christ in hopes that it would be exhibited at the 1904 St. Louis World's Fair. (Long-term loan from the modern Art Museum of Fort Worth)

Francis R. Lubbock (1815-1905), marble, modeled 1895; cut 1895-97. One of the first portrait busts Ney executed in her Austin studio was that of this former Texas governor who strongly supported Ney's work. (Long-trm loa from the Dolph Briscoe Center for American History)

Oran Milo Roberts (1815-1898), plaster, modeled 1882; this cast 1898. A member of the Texas Supreme Court, a two-term governor, and the first law professor at the new University of Texas, Roberts was one of Ney's most influential and loyal supporters. This bust was Ney's first made in the U.S.

William Lambdin Prather (1848-1905), plaster, 1905-1906. As president of the University of Texas (1900-1905), William Prather popularized the slogan “The eyes of Texas are upon you,” which became the title of the school’s official song. Prather’s death had an immense effect on Ney, who considered him “a dear, true friend to art.” Ney ardently supported the university; she left it most of these sculptures in her will.

John Henninger Reagan (1818-1905), plaster, 1895. John Reagan served several terms in the U.S. House and Senate. While many visitors see a resemblance to President Ronald Reagan, evidence confirms that they were not related.

Jacob Bickler (1849-1902), plaster, circa 1902. This bas-relief profile portrait commemorates Ney's friend and neighbor Jacob Bickler, who established the Bickler Academy in 1892. This plaque was made by Ney's close friend and sole pupil, Nannie Huddle, a prominent Austin artist herself.

Clasped Hands (Study for Lady Macbeth), 1899-1902. This study was one of many that Elisabet Ney executed while completing Lady Macbeth, in which she captures the Shakespearean character washing the metaphorical blood of King Duncan from her hands.

Johanna Runge (1856-1933), plaster, modeled 1887, this cast of Johanna 1900. Julius Runge was a prominent merchant and public official based in Galveston who helped Ney acquire the Liendo Plantation in Hempstead. In 1887, Ney visited Galveston to make these portraits of Runge and his wife as a token of thanks. Johanna would be one of the founders of the Texas Fine Arts Association. These busts were donated to the museum by Johanna shortly before her death.

Julius Runge (1851-1906), plaster, modeled 1887, this cast of Julius 1887. Julius Runge, the son of German immigrants, was a prominent merchant, financier, and public official based in Galveston. He was also The German Consul for the young state, and helped Ney acquire the Liendo Plantation in Hempstead.

Lady Macbeth, plaster, 1902. One of Ney’s final works of art depicts the famous sleepwalking scene from Shakespeare’s tragic play, when Lady Macbeth, haunted by her role in the murder of King Duncan, wrings her hands and tries in vain to wash imaginary blood from them. The final marble version is now in the Smithsonian American Art Museum in Washington, DC.

Samuel Houston, Elder Statesman (1793-1863), plaster, 1903. Sam Houston is a starring figure in the history of Texas. Houston's defeat of the Mexican Army at San Jacinto resulted in Texan independence. This bust, modeled after the full-size statue, depicts Houston as an elder statesman.

Samuel Houston as a young man (1793-1863), plaster, 1903. Sam Houston is a starring figure in the history of Texas. Houston's defeat of the Mexican Army at San Jacinto resulted in Texan independence. This bust, modeled after the full-size statue, depicts Houston at a young age.

Samuel Houston, plaster, modeled 1893; cast 1902. Perhaps one of Elisabet Ney's most celebrated Texas works, this full-figure sculpture of Sam Houston was originally commissioned by the Texas legislature to be displayed alongside Stephen F. Austin at the 1893 World's Columbian Exposition in Chicago.

Stephen Fuller Austin, plaster, modeled 1893; cast 1902. During the summer of 1892, Ney set to work creating full-sized statues of Stephen F. Austin and Sam Houston to be displayed at the 1893 World's Columbian Exposition in Chicago. While Ney was ultimately unable to complete the statue of Austin in time to show it in Chicago, she later created marble versions of the piece for display in the Texas Capitol and the National Statuary Hall in Washington, D.C., where they remain today.

Stephen Fuller Austin bare chest (1793-1836), plaster, 1893 or 1903. Known as “The Father of Texas,” Stephen F. Austin brought the first 300 immigrant families to Texas to populate his settlement, the Austin Colony, in 1825; these families became known as the Old Three Hundred. Ney's 1893 and 1903 busts are variations on the full-size figure of Austin.

General Albert Sidney Johnston (1803-1862), plaster bust, 1901. The State of Texas commissioned Ney to create a monumental statuary piece of Albert Sidney Johnston for the Texas State Cemetery. The plan came about as early as the 1890s, but was not commissioned until 1901, and was fraught with difficulties. This bust was a study for the final piece.

Lorne Ney Montgomery (1873-1913), plaster, circa 1886. Ney made this bust portrait of her teenage son while she was still living at Liendo, not long before Lorne left for college in Baltimore. By all accounts, Ney was a strict mother and Lorne, an only child after the death of his older brother, was a rebellious son.

Benedette Tobin (1849-1901), plaster, 1893. Benedette Brace Tobin was one of Ney's most committed Austin supporters. As president of the Ladies' World's Fair Association, Tobin was instrumental in Ney receiving the commission for the statues of Sam Houston and Stephen F. Austin.

Ella Dancy Dibrell (1862-1920), plaster, 1900. This portrait medallion depicts Ney's friend and supporter Ella Dancy Dibrell, who purchased Formosa at Ney's death and was one of the founders of the Texas Fine Arts Association.

Carrie Pease Graham (1851-1882), marble, modeled 1895, cut 1896-97 (in Vestibule). This bust was commissioned to memorialize Lucadia Pease’s deceased daughter, Carrie. The incorrect inscription, “Julia Pease,” was a mistake made by Friedrich Ochs, who carved the marble in Berlin.